Let the grassroots meet the treetops 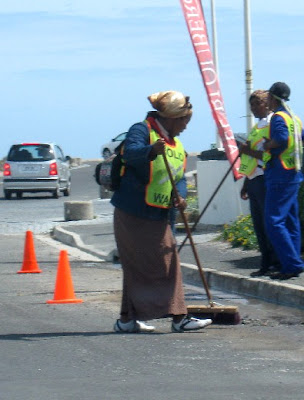 The monthly income, of the population in South Africa, can be divided into five groups.


The aim should be to get the majority of money earners in the upper middle class and the base line for any South African the lower middle class.

A way to approach this challenge may be for the R20, 000 and over group of income earners to pay a percentage of poverty relief tax for each rand they earn over R20, 000.

This poverty relief tax should be used to

* supplement the basic pension to R3, 000 per month,
* to provide free schooling and medical care,
* and to boost the wages of the lower middle class group, so that the treetops do not tower so high above the grassroots.

Original post from: Get Africa Working
Posted by rose w at Saturday, September 26, 2009 No comments:

Strike while the iron is hot!

While the television broadcasting corporation in South Africa is under scrutiny, it may be the right time to take responsibility the role television to can play in educating and guiding a nation.

What is regularly shown on television may have a long-term impact on the minds of the viewers.

“What we view on television today becomes our reality of tomorrow”

The power of audiovisual stimuli should never be underestimated; it can make or break a nation.

Television could be utilized to close a gap in education for both adults and children.

Taking responsibility, for the quality of programs to be offered to the public, need not break the budget.

Free training and VBEE (Volunteer Broad-spectrum Economic Empowerment) points which could be cashed in for *government favors. (Like VBEE points in the piggy bank)

We could start moving away from financial rewards for all jobs done.


People no longer need to travel to capital cities and stay over in expensive hotels to conference, or having the inconvenience of leaving their home towns.

Volunteers can overview what is being offered, to the public, on the television screens. A team of psychologists, elders and other experts can determine the effect the viewing will have on the nation.

They can be trained and provided with the necessary computer equipment to attend virtual meetings or conferences.

Electronic conferencing can be launched from local libraries if the volunteers are unable to participate due to insecure living conditions or computer-illiteracy.

There are many ways to get the elders and other experts from all over the world together to nation-build.

Local librarians and teachers can be trained to help the volunteers with this task. It could be considered their duty to nation-build without expecting remuneration.

A VBEE piggy-bank system can here also be implemented to be used as bargaining points for promotion.

Africans can help other Africans to become proudly African again. They can learn to respect themselves and others again. We have so many damaged people in the country and on the continent.

People are damaged because of their past experiences as freedom fighters, child soldiers, poverty, drugs, immorality, illiteracy and violence. They need to learn what is normal and what thoughts are healthy and what is destructive to them and their environment.

We need to heal in order to respect and honor again.
We need to reach out to fill education gaps when a system breaks down or is not yet in place.

A few local soaps with a morale building script, instead of one that is based on divorce, back stabbing, murder and cheating can provide a great influence on the minds of the viewers.

We need to create heroes with a high code of ethics -- Heroes who are nation-builders.

* VBEE points could be given to people who make a difference without receiving financial rewards for their service.

Guidelines to statistics and questions that can determine if a group of people should receive refugee status in their country of ancestry and other sympathetic countries.

The Statistics/Questions to be determined/answered relating to the race or group who seeks asylum:

1.
What percentage, living in the capital city of the country in question, has been a victim of crime or violence on more than one occasion?
2.
What are the statistics of murders (or unnatural deaths) of citizens living in the farming community of the country in question?
3.
Do they have equal chance, without restriction, to compete on the business arena?
4.
Do they compete equally, on merit, to qualify for tertiary education?
5.
Are they being suppressed, as a race, to give another race time to catch up?
6.
Do they receive equal opportunity to receive financial aid in the form of pensions, disability, and study grants?
7.
Do they have an equal chance to get promoted at work?
8.
Are they being suppressed, in any way, to give another group the chance to advance?
9.
Are their lives in danger?
10.
Do they live in fear?

If the above points do not score 100% in the favor of the group or race in question, they can be considered as being victimized or suppressed.

The compassion of first world countries, in regards to suppressed or victimized citizens in African countries, can alleviate the problem by offering them refugee status.
By opening a door to escape victimization and suppression may help to level the playing field in the country in question. (If it is perceived as unbalanced due to the group of people in question)

Perhaps the international community should review guidelines relating to who should qualify for refugee status.
Killing a group of people emotionally, may be as bad as killing them physically.
Suppressed or victimized people should have the opportunity to return to their country of ancestry.

Original post from HEALING THE DIVIDE
Posted by rose w at Friday, September 04, 2009 No comments: