1. .Top-level meeting of the stakeholders will discuss progress with NEPAD’s e-Schools programme

2. . More than 100 journalists have benefited from NEPAD programme

q .03 International media summit on the re-branding of Africa

q .03 Leader of the Eminent Persons explains the details of the Peer Review process

q .02 Important role for Africa’s media in the development

q of the continent

A diagrammatic forecast of a possible wealth distribution in Zimbabwe for a post Mugabe rule.
see the explanation of he diagram below 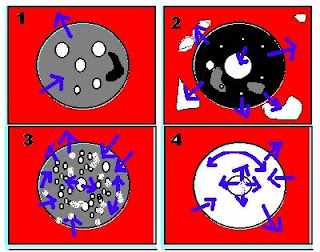 Everything depends whether the economy of the country will be a main criteria in a non-racial shared society.

The situation as it was pre-Mugabe dictatorship. Note the cener indicates the governmental system.

The arrows indicate the circulation of wealth within the country.

1. Pre Mugabe rule - wealth in the hands of few, but not much reaching the general population

2. Mugabe Rule - the wealth in the hands of the government and a few who found favor with Mugabe and others who managed to hold onto some of their wealth, while virtually nothing reaches the people. Much of the wealth leaked out of the country, while many of those who are able to provide poverty alleviation emigrated.

3. Post Mugabe Rule (possibility) Wealth returning to the country, but this time-shared among the people. Much help from outside.

4. Prosperity for all. A good circulation of wealth and education. An example of "Unity is strength"

number of groups and individuals decided to

cooperate with the theme of the 2007 Semi-

nar, Evoking the Soul of the Nations. Greek co-

the theme, shared documents both past and

present, and among other issues, reflected on

the possible rays of Greece, with a general con-

sensus that the Soul ray might be the fourth,

and the Personality might be the third ray. A

group that regularly meets once a week in South

Africa, discussed the theme, and there was a

definite interest and focus on the soul of South

Africa, including some reflection on the condi-

tioning astrological signs. It was noted that:

"The opposite of apartheid (separateness) is

Unity. There was agreement that winning the

Rugby World Cup had united the country for a

short but tangible period... This sense of earned

respect is something we as a nation will need

multi-cultural and emerging Nation... For the

nation to heal it is imperative that each frag-

within a larger unity already exists and must

be encouraged. In this sense, synthesis does

not dismiss but incorporates the many colour-

ful and richly diverse cultures into the whole."

Studies in Tucson, Arizona held a retreat on

November II, 2007, holding in solution both

the annual Keynote and topics of the seminar.

And we know that other groups, such as Denver

subjectively through thought and meditation.

This entire question of the planetary centres and the energy which

they release is naturally of great interest and, could we but realise

it, of supreme importance. Some great truth lies veiled behind the

as set apart for their spiritual value; they make them the goal of their

pilgrimages; in connection with the human being, the same analogy

holds good and the heart, for some reason, is regarded as holier and

more desirable in its expression than the head. All this indicates an

befound the intangible, the real and the holy. Alice Bailey,