Freedom is not only a right, it is also a responsibility.

Freedom to know the truth is regarded as a basic human right in countries where the governing bodies are prepared to take the responsibility for their actions.

Institutions with something to hide or cover up, on the other hand would welcome a secrecy bill.

Is it possible for any leading African country to take a step back to the days of Apartheid with gagging policies on information sharing?

I do not think the world will tolerate another iron curtain.   Instead of hiding information with secrecy bills, the truth will be published in through the international media, which will focus the world attention on other government shortcomings also.

Parallels will be drawn with countries like Zimbabwe and the suppressive era in our history, resulting in negative criticism for the Sub Saharan African region.

The truth will come to a boil in Google, Twitter, Facebook, U-Tube etc through the internet and other international media.

We are moving towards globalization.       The world is moving towards responsible action and cover-ups are not tolerated any longer.    The global media hunts the revealing of truth behind a cover-up with the same passion as an Astronomer in his search for undiscovered heavenly bodies.
Posted by rose w at Saturday, April 27, 2013 No comments:

Transformation should not aim towards changing the colour of leadership to ‘black or white’. The aim of transformation should be towards perfection, or so that it can deliver a better service (which is another measure for perfection).   The aim should be to be better than before, not only look better.    Majority will rule in the long run, if they are given educational opportunities on par with the best, but then they will also need strong role models; people in charge that stand head and shoulders above their subordinates.    They need to aim to win by being the best, and not aim for an emotional sympathy vote.

The drawbacks of putting someone with lesser qualifications (but a better skin tone) in charge will have negative kickbacks.
•    The more qualified co-workers will criticize the decisions made by the leadership.
•    They will neglect their own work because they are disillusioned by the system.
•    They may complain to the press who will report on the weak decision making process and the country concerned will loose Brownie-points from the global community.
•    The sky-limit will just be another step lower than it can be; the best would have been downgraded.
•    A developing country will be another step further from being included in the global decision making group (or a step closer to loosing that position).

In South Africa employment decisions should not favour colour above competence.   If we do that we shall continue to be a developing nation.   We need to break out of the ‘apartheid’ mould to become a developed nation.

No part is bigger than the whole.

Using the same measure no country is bigger than the continent.    South Africa is not bigger than Africa.   A continent is measured both by its best and worst nations.

The photograph below is the headlines of an article from the Cape Times 10/04/13 which was the inspiration for this blog post.   The contents should be regarded as fact because it is incomplete. 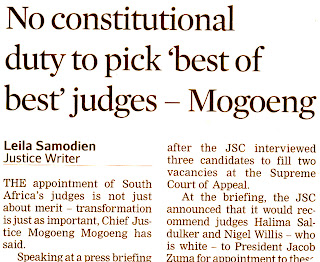