A man's house is his castle 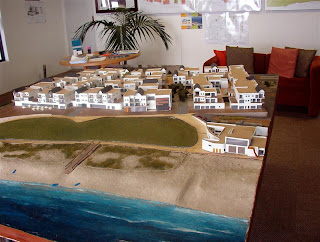 In upmarket neighborhoods, small families experience the need to expand their homes.

Politicians own multiple dwellings to cater for their needs. Yet in the townships people are being supplied with one and two roomed houses to cater for large and sometimes extended families.

Perhaps it is time to plan around people’s needs and customs when building low cost houses in townships. We know that six kids in a two roomed dwelling will eventually result in backyard extensions.

Since rural Africans normally live in groups and have the extended families around them and it is not unusual for colored families to have the grandparents rearing the children while the parents go out to work, we should plan building-developments around these customs.

Homes should not be built and designed according to names on a list but for real families with needs.

Healthy community and family customs should not have to exchanged for a roof over the head.

The force behind the killing of white African farmers.

Every week, according to reports, white farmers are killed on farms in Southern African countries. These farms produced food and wealth for a nation. The seized land is often divided among groups of people who can hardly sustain themselves and has a negative impact on the wealth of their nation.

The reason of the killings boils up from deep within the psyche of a continent, that for centuries evolved by killing what the inhabitants perceive as their rivals. The one who have what you want, has throughout the history of Africa, been regarded as the enemy that should be killed before the wealth can change hands.

This is the very law that kept Africa poor and in the dark. The only ones who benefited from war, were the ones who instigated and controlled the killings from their remote safe places; the ones who do not need to fight for survival become richer when the land eventually comes under their control.

Many African rulers rule by empty promises, instilling hopes and dreams that will never be realized, and the promise to defeat an enemy that is created in their minds. For many centuries the people never questioned the wealth of their leaders in comparison to their own sufferings.

The profits derived from the recovered land would only guild the lifestyles, build the castles, and increase the fleets of luxury vehicles of the politicians and governors. With every war the people become poorer, food becomes scarcer and drugs dull the agony in the minds of the youth. The rulers will buy more weapons of war to keep the people occupied by declaring enemies to give the people something to live for …. to give them hopes and dreams of a fair and free life that will never bear fruit.
The people, the fathers and mothers of the ones who fought the battles for the rich remain poor. Many Africans become casualties of war or die from starvation.

It is only since the beginning of Democracy in South Africa that the farm killings have been purely about race. Since the vision of an African brotherhood, it became difficult to find an enemy other than one of color (or no color). African rulers wanted enemies on own soil.

The white farmer “Boer” is still regarded as the enemy and for a continent whose citizens are the offspring of warriors that lived by the sword and knew only how to wipe out the enemy in order to rule, the color of the skin marks the enemy.

When the last white and brown person has been killed, and famine and poverty spins out of control, what, or whom, will they then label as an enemy to kill next?

Democracy, negotiations and conferencing – the tools of freedom and prosperity make little sense to the children of poverty.

Many Africans fail to recognize that they already swapped the loincloth for the suit, the hut for the mansion, the sword for the weapon of mass destruction and the donkey for the jet. Yet they hold onto the old ways of war. They divide when they should unite. They make war when they should embrace freedom.


Democratic ideas have not brought better lifestyles for the majority. Only the skin color of the rulers changed. The freedom to stand first in queues, sit on any bench, use public toilets and attend any school is not putting food on the table or roofs over the heads of many. The fact is that it is not democracy than keeps them in poverty but rather the lavish lifestyles of their leaders that keep the grassroots in the mud. The rulers still enrich themselves instead empowering all the citizens of the nation. They continue to measure the success of a nation by the wealth of the rulers and the might of its armed forces and not by the prosperity and happiness of all the citizens.

The principles of Democracy offer sound solutions to end poverty only when it is embraced totally by all citizens and leaders. The first world is a weak example of the power of democracy. African democratic solutions need to be implemented that will share the wealth. The voice of the thinking, educated people should rule the economy and not rulers that line their own pockets, and control the hoards of uninformed masses with empty promises. The need of the people must come before the greed of rulers.

It is time that individuals work for the wealth and economy of all citizens; this should be demonstrated by the examples of those in power. They should be role models for shared wealth and patriotism.
Greed and division among any ruling body cause despair and separation among their citizens.

Recognize the people who can lead the country to prosperity and not the color of their skins. Recognize the ones who direct the ploughs that will fill the breadbasket of the nation.

Fight for education, health care, housing and skills to bring in food for the table and comforts for living. That is your right. It is the right of every citizen. The enemy is greed and unfair distribution of wealth. That is the enemy, but that is not the only enemy.
Imposed ignorance and false information is a bigger enemy still.

Everyone should be able to access the true information that can lead to right living conditions for all citizens.


IT IS YOUR BIRTHRIGHT TO HAVE A HAPPY LIFE.
Posted by rose w at Thursday, September 15, 2011 No comments: