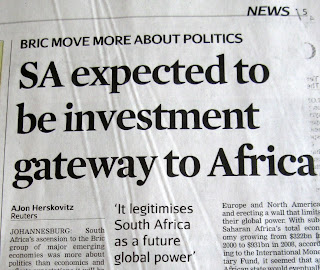 A year of shame for South Africa 2010

Perhaps we had the best parliamentary attempt ever to achieve better conditions for the people but South Africa failed miserably during 2010.

Through the FIFA Soccer World Cup offered our country a wonderful opportunity to show the world that an African country have the ability to rub shoulders with other financial world leaders.

We had the ability to become an economic powerhouse but the racial tensions, racial war songs and threats, and the unions using the world cup opportunity to highlight their own agendas for power and money, cracked the foundation of this African opportunity.

Today all Africans should morn our failure. We, as a country stuffed up the best opportunity any African country ever had to become an economic power and a natural heritage showcase for the world.

Even if we failed to gain economic trust, we had a back door through which we could promote this country with our natural heritage of fauna and flora. What did we do on that score in 2010? We sold great portions of our natural heritage and coastal land to dubious financial schemes. We allowed our ‘big five’ to dwindle and nearly become the ‘big four’ by being too laxidaisy with our low-key conservation efforts. The media did more for the conservation effort than the rulers of the country. What can we expect, there is no political leader to devote his attention purely on animals and nature. We killed baboons on Table Mountain and the in wild because the conservation department thought that managing baboons mean that they should train them to remain on the mountain without food, which is not the nature for those animals.
Even after half the mountain burned down. People shot and tortured these when they raided nearby homes for food, instead of setting up a feeding point where these animals could be fed as a tourist attraction.

It is easier to train these intelligent animals to accept one feeding point than to train them to starve and stay put. We cannot even train humans to see the bigger picture beyond the world cup opportunities, or poachers to imagine the shame of an African wildlife without rhino’s. How can we train baboons to sit still and starve for the sake of peace?

We should realize that in most third world countries there are a majority of citizens who do not have the educational maturity to see the future, global and economic consequences for their actions.
They can see only in the moment and they take the queue for their actions from their idols, which are also only their leaders until the 'illusionary bubble of personal gain' bursts.
All world politicians know how to manipulate the unthinking masses. It is in their rulebook.

The thinkers of the world should learn to look beyond results from majority votes and mass actions when a large number of a population, in any one country, belongs to poorly educated or non-thinking majority groups.
Posted by rose w at Sunday, January 02, 2011