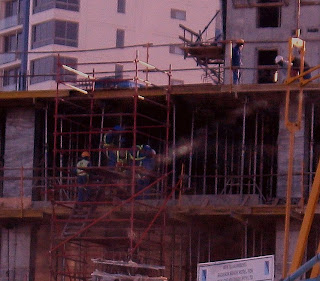 Narrowing the gap between rich and poor should start at the very top, with the politicians who up to now considered themselves as separate from those who voted them into those positions. .

Some politicians behave as if they can walk on water while “the people” are no better than pigs rolling in mud.
We can see that in the way their million rand vehicles are being driven with no consequences for road rules and the deaths caused by disposing of those who may be blocking their path.

Some African politicians give the impression that to them “the people”, sometimes referred to as “rate payers”, “voters”, “tax payers”, “previously (20 years ago) disadvantaged” or “the underprivileged”, depending on what they need to milk from them, are merely tools to furnish their popularity and riches.

Most African politicians are counted among the highest paid politicians in the world.
If measured by the wealth of their economies, they may emerge as the wealthiest on the globe.

It is time that politicians stop blaming the past for the state they are in.
If the past was to blame, one should be able to see a decrease in poverty and suffering after twenty years of freedom in countries like South Africa and Zimbabwe.

In twenty years a whole generation reached maturity and all that we can see is more fighting, more crime, more poverty, a collapse of services and politicians together with a hand full of often related BEE partners and crime lords living in luxury that is beyond the imagination of the average African citizen.

If some citizens can enjoy one meal at a restaurant that costs more as the total pay packet that another person will earn in five years (or in some cases a life-time) then there must be a rotten apple in the bag.

One of the missions of both Jacob Zuma and Helen Ziller is to make those in power accountable for their areas of leadership.

We can only hope they succeed and that they rethink the mode of wealth distribution in the country, including their own.

It is impossible to create a sustainable living by multiplying zero by X. One needs to subtract the zeros from those who have millions. Wealth need to flow from those at the very top - not from the middle classes who managed to get there by hardship.

Taxing the average working citizen will just push him to the brink of unemployment.
Taxing his home will make him homeless. Over charging him for medical services may kill him.

By taking from the very rich, will at the worst force him into a comfortable middle class.
This will be the best way to level the playing fields.