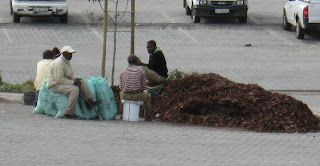 It is beyond a great majority of our workforce's comprehension to realize what harm their strike actions have on the economy.

They can not understand the importance of wealth sharing or that by empowering their companies and their country it will be in a better position to look after those in need.

Unfortunately many of our people in leadership positions have very little communication and managerial skills. It appears that some of them have little interest other than blowing their own trumpets.

It is not only our children, at grass roots, that need education.

We may need to train the whole population of South Africa to become proudly African and to recognize which of our combined actions are empowering and which will lead to lowering the general standard for all citizens.

The trend of violence and disrespect towards employers, places of employment and people in power need to change.

It may be the miss-management and glut of those in power that fuel much of the discontent of the people.

Can we blame the people if they want better living conditions while government leaders spend more in one night's festivities than a whole community will earn in several years?

Leaders need to earn their respect and become model citizens themselves.

Our television screens should display programs that will build the nation and heal the earth.
We need programs that will make us proudly African again and respect our environment and natural resources.
We need to curb viewing that encourages loose morality, sex, crime and violence.

Sooner or later people will act out that what they view on television. Sooner or later they will start accepting an immoral society, crime, violence and dishonesty as the norm.

Free television showing material under a strict moral code that will educate and empower African Citizens could be made available to all citizens.
Perhaps an independent task team, consisting of teachers and psychologists, needs to review and control what is being shown on SABC TV.

Sport, educational and morale boosting programs alone in three different languages should be aired on the free television.

The normal viewing, as is, can be made available through paid television to maintain democracy for those who choose to watch it.

This may sound like communism, but when the majority of the workforce in a continent was deprived of basic education, we need to correct those imbalances in society.
What better way to generate proud citizens than through free television broadcasting?

People need education on farming and self help and sustained living advice.
People need to learn to respect their environment and their leaders.
Leaders need more opportunity to communicate directly to the larger public to explain the motivation behind their actions.
.
Free educational television should be available to everyone with electricity or cell phones.

We can heal a nation, but we need to heal ourselves first.

The people don't need domination but education to make the right choices.